You are here: Home / Practicing / My home in Budapest 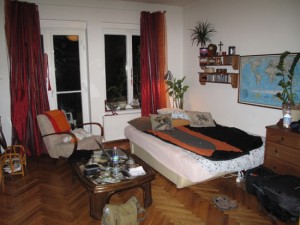 Thanks to Krisztina, Diana and Scraby I’m now living in a little apartment till the end of the month in Budapest. Krisztina for asking around, Diana for offering her place to me to rent and Scraby (Diana’s boyfriend) for being happy with the opportunity for a “trial run” living with Diana. I’m not sure how excited he was with Diana’s two cats being part of the package but it’s day 5 and everyone is still alive so I guess it’s a good thing!

We went to Scraby’s on Friday night for a few beers, laughs and a couple of games of Texas hold ’em poker before “we go to a party” which in Hungary basically means hitting the town for a night out. Unfortunately the only photos of the night were Scraby rapping a few tunes before we left for Cha Cha Cha, a club on Margit-sziget island in the middle of the Duna (the river separating Buda from Pest).