You are here: Home / Practicing / Beachside at Juhu, Mumbai 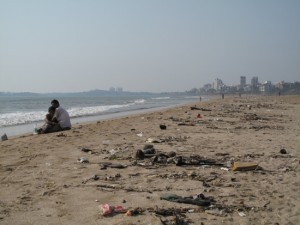 My first venture onto the beach in Mumbai drew conflicting emotions, alien from any I expected and typically feel – I love the beach and if I don’t visit regularly I go a little stir crazy until I throw myself into the clear blue to be cleansed and invigorated once again.

It was shortly after sunset when I’d met Anne for a Masala Chai at Mocha cafe, Juhu beach. After the Chai I was drawn towards the faint sound of small waves caressing the sand; it had been more than a few weeks now and I was frothing quietly.

Here the hassle is not from competing surfers amongst the waves, it’s before your toes (or still covered feet) touch the sand, beginning with little tapping hands against your leg followed by the more savvy, ignoring your repeated “naheen” hoping to break your false indifference.

As we walked I felt a tingling up my spine, the chai gnawing holes in my stomach and a loss of something that wasn’t mine but for all the world to enjoy.. our oceans and the way they should be respected, nurtured and enjoyed. Knowing I couldn’t run barefoot and swim for fear of getting sick was upsetting but in a few weeks I would again be moving on while the majority of Mumbai, trapped by class and poverty, left behind, unable to enjoy the simplest but most powerful of pleasures the oceans can bring.

Rest assured the clean up has begun with the beaches apparently more environmentally friendly than several years ago. Several campaigns are launched but the task is massive and who knows how long it will take. A quick google search will show students leading the charge with localized beach cleanups trying to keep the awareness high. 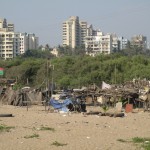 Several days later I returned with Andrea to witness the beach by daylight, relieved to find couples walking hand in hand, youngsters braving a swim and smiles on faces – telltale signs of the potential everyone can see. At the end of the beach I paused, looking out to sea and realized that even standing amongst the garbage I could appreciate the beauty and draw peace from an empty horizon.

FYI, the plush green lawn was less than 100 metres from this beachside slum.